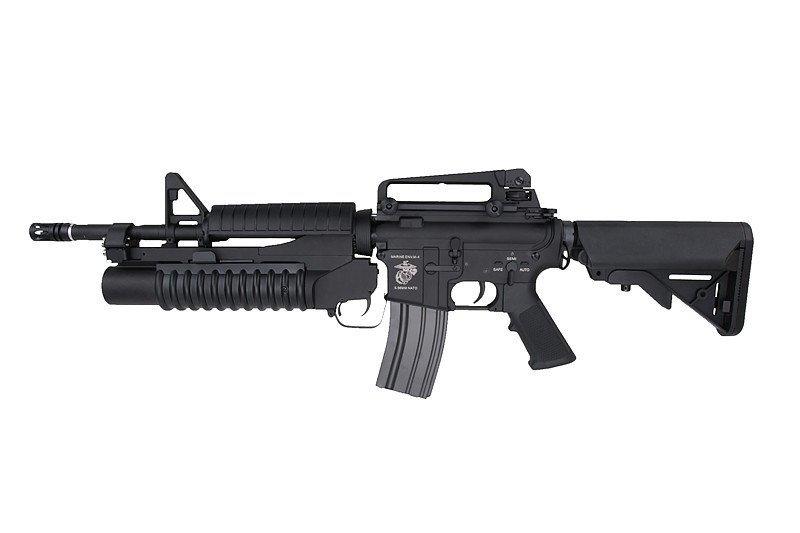 The Specna Arms brand SA-G01carbine replica made  predominantly of an homogenous alloy of zinc and aluminum with the use of steel elements in the most neuralgic points of the replica ( the screws, the pins and the tactical sling attachment points are made of steel ). The SF type stock which holds the battery and the pistol grip were made of polymer plastic. The replica’s body, the RIS rail set were a subject to the process of anodizing what guaranties a high level of protecting the replica against corrosion. The paintjob of the replica itself was made using the pulverization method after a previous sandblasting of the replica’s surface. This ensures the paint’s higher, than usually, durability against abrasion. The replica’s body beads the USMC markings.

The replica was fitted very well – in a way that it was previously observable only in the G&P or Classic Army class replicas. It was also perfectly balanced. This ensures a perfect maneuverability of the replica while as its weight is almost not felt when you place the replica on the shoulder.

The replica uses a quick main spring exchange system, the so-called Enter & Convert™. This allows for a quick and fluent adaptation of the replica’s power to the conditions of the battlefield without the need of having access to a workshop or a number of specialist tools – when you take the gearbox out the replica’s body, the process of exchanging the main spring takes literally seconds.

The advantages of the Enter & Convert™ system are hard to overestimate. In the light of the laws existing in Europe and which limit the muzzle velocity of the replica and the establishments inside the airsoft society, this system guaranties the user great possibilities and more liberty. The Enter & Convert™ system allows to change the main spring in little amount of time, and, what is followed by this, adapted the muzzle velocity of the replica to the battlefield so it guaranties a perfect compromise between effectiveness of firing and the safety of your own and other players.

The replica was fully adapted to cooperate with LiPo and LiFe type batteries. Thanks to the basic muzzle velocity of about 410 FPS which is guaranteed by the default main spring, the replica is perfect to be used in middle distances. The set also includes an M90 main spring which allows to decrease the muzzle velocity to about 310 FPS making the replica perfectly adapted for short range operations or fighting inside buildings.

A reinforced at the cylinder level gearbox contains a steel spring slide that is an element of SAEC™ system and mounted on 8 mm ball bearings and washers steel gears. The system is secured with four anti-reversal latches. A light, made of polycarbonate polymer piston is equipped with a set of steel teeth in order to increase its durability. Also implemented were a type 2 cylinder and a steel circuit-breaker. Replica is factory-fitted with and accurate, rotary type polymer Hop-Up unit that allows very precise and stable regulation of BB overclocking.

The Upgraded Version is equipped with some new, improved internal parts:

The replica is equipped with a top 22mm RIS rail, a set of front 22mm RIS rails and an adjustable stock. The top RIS rail holds the flip-up type iron aiming sights which can be easily detached and replaced with any optical-electronic aiming devices. Thanks to the collapsible stock which is ended with a anti-skid stock’s foot, it is possible to adapt the replica’s length to the built and the preferences of the shooter. The default muzzle flash-hider is placed on a 14mm counter-clockwise thread what allows the attachment of a sound suppressor in its place.

Specna Arms replicas are compatible with most of the magazines available in the market, for instance with magazines of the following manufacturers: - BOYI, - Airsoft Systems, - SRC, - King Arms, - MAG,  - STAR, - ACM.